Who doesn’t love Netflix? As the world leading streaming service, you can find all the greatest entertainment on Netflix. Movies, TV shows, documentaries, and many things else. That’s why when Netflix decided to expand globally, everyone was so thrilled. Well, except those in China. What we thought is simple. Back then, everyone can enjoy the greatest collection of the world’s greatest movies. This is when we are mistaken. Even though Netflix has been everywhere, their contents are not. Netflix contents are categorized by location. That means, there are some contents you can’t access. If you are living in New Zealand, you may not be able to access US contents. That’s disappointing. Because some local contents are not ‘worthy’ enough to watch. After the expansion, most people subscribed for Netflix because we thought we could access its global library. The fact is, we can’t. So, that’s why we came with our traditional way of dealing with geo-restricted contents. VPN.

For just a few moment, it did.

That Hatred Inside Netflix

Netflix must hate VPN badly. If that’s not the case, the company won’t ban VPN users from accessing its movies. Australian subscribers were the first. Currently, they can’t watch any content outside the country. This is what I can tell you now. There is not a tiny sign this will end. That means one thing, my friend. More will follow.

I understand Netflix concerns. It is a company they run. From their perspective, there are two sides of everything. At one side, they have partners. At the other side, they have customers. Both side must be kept on balance. You can’t only serve your customers without paying the same attention to your business partners. This rule goes sideways. A company like Netflix must have realized this. They suppose to be. However, the fact is, they don’t. Netflix told the world that this policy is meant to protect their partners’ contracts, copyrights, and distribution rights. Well, there is nothing wrong with this, if only Netflix also cares about their customers. If only Netflix cares about their worldwide subscribers, this won’t happen. Netflix told us that VPN users are behind their movie hijacking. People use VPN to watch contents that are not currently available in their area. Netflix may be right, but remember this. Not all VPN users use VPN to unblock watchable contents. Some choose VPN because it works extremely good in protecting them. Just like VPN Asia. We care about everyone’s online safety. Some may choose us because we help them unblock contents on the web. However, there are some people who came to us seeking online protection. What about these people? Should Netflix also block them? 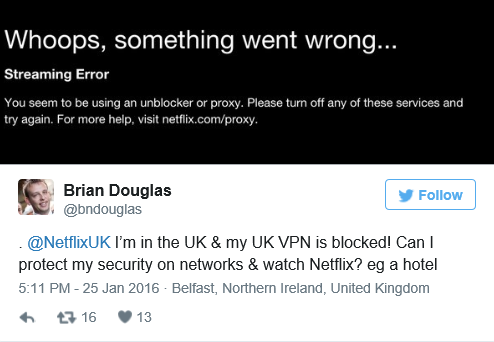 A company as big as Netflix, that decision didn’t come easily. They are prepared for the consequences. But, there is one thing they might be not prepared for. This decision has already created another huge problem. 54 out of 75+ million of Netflix users were detected using VPN while they are connected to Netflix. That’s more than 50% of Netflix total users. Now, here is the real question. Would Netflix mind to abandon those with VPN?

Netflix and A Long Story with VPN

I am pretty sure Netflix won’t do that. However, they also haven’t come with a solution yet. Please, don’t call their last ‘effort’ as solution. What they brought to you is still too far away for being called solution. What the company offered is completely a mess. Why should you use that worst password to replace your VPN? 123456 or something like that…. That must be a joke, right? So, the company thinks they can take the VPN out of you while keeping you as their customers. They ask you to leave VPN while they can’t give you, at least, the same protection we can give you. Now, that sounds very funny.

Here is one funny fact, though. Not all VPN users are affected with this decision.  All are affected, except US military bases. But only the bases, not the military personnel. If any of US forces want to watch Netflix, they should use their base facility.

So, why does VPN matter? Wouldn’t it be good if everyone just leave Netflix? Why do we still have it?

If you have this question in mind, please let me show you an example. There are lots of movies on Netflix. They are so abundant that you may always find any movie you like there. But, there is one you can’t find. There is not a movie about stealing from a baby. You can go to any date in history. You can trace any channel. You can do whatever you want to find it, but you won’t. Why? Because it is not funny. No one is stupid enough to steal something from a body. That’s the same stupidity Netflix has in mind. No one is stupid enough to browse the web without VPN, if they realized how many cyber threats there. Not even Twitter can escape.

Netflix must have known it. The internet is a dangerous place. Browsing the web without VPN is just like entering a war zone where there are bullets, mines, and grenades everywhere, without wearing protection suit. Perhaps, you don’t believe it because you have never heard of it. You don’t believe it because so far, you are ‘safe.’ You won’t believe it because you believe you have done enough to keep your information secret. Well, let’s just say it. Nothing is secret on the web, except you got VPN. When you got a VPN, everything is encrypted. The hacker will only see your computer talking to him. Nothing else. They can’t see your real IP address, browsing history, personal information, and everything else. With VPN, no harm can be done to you. No one can spy, attack, intercept, or steal anything from you. That’s why people love VPN. That’s how VPN has changed everyone’s life. And now, Netflix is trying to end that life.

We have only one thing to tell to Netflix. We understand their concern. They want to solve that huge licensing problem. We know it well. Their business partners won’t make money if everyone is pirating the movies. But, that doesn’t mean violating everyone’s right to gain online security. Even though other firms do similar thing, it doesn’t mean Netflix must copy that way. If Netflix is really a good company, they must have better solution than this.

Also, Netflix must stop generalizing everything. Just because some people use VPN to sneak peak a movie, that doesn’t mean every VPN user does that. Generalization is wrong. Once again, Netflix must have known that. As a game changer in streaming services, they must have resources to find it out. This decision they made, is making the world less secure every day. Wait long enough and every hacker can get into your system easily. Imagine it. Stalking, ransomware, adware, identity theft, and many more. They will be right in front of your system. Well, thanks Netflix.