How would you describe the best antivirus? Would it be about the multi protection you got? Nope. I don’t think so. Today’s antivirus is far more complex than the first we had in 1971. First reason: we got more mobile than ever. Today, antivirus has evolved to something far more advanced than the Reaper. It is not just about protection against virus. It is also about the whole cyber security. Today, our concern is bigger than just a virus. We got malware, adware, ransomware, trojan, and many more flying around us. They are here, on the web, waiting for their target. This threat is serious. But, there is something weird about this. If these cyber threats are real, why should we just think about getting rid of them? Why we just think about getting an antivirus to remove them? Every virus we remove, it will be replaced by another virus. Someone will create that new virus. So, what have we done? Nothing. We think we got the best antivirus. We think we can get rid of those cyber threats. But, the real thing is, we don’t know what we do. We don’t even know what describe the best antivirus is. 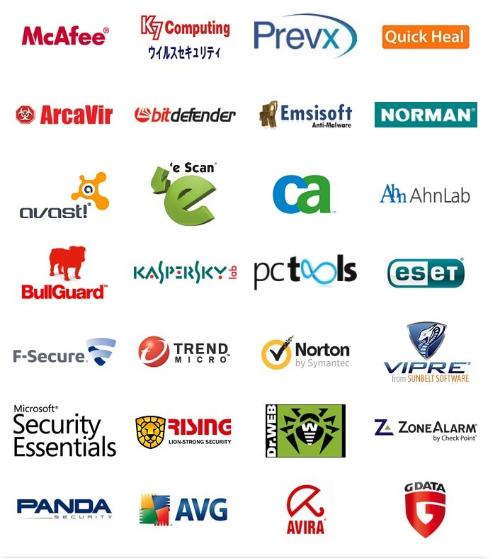 This put us in a loop. An infinite loop to describe the best antivirus. What we don’t realize is, while we are in this loop, something terrible might have happened right on our back. This is about those antivirus apps. This is what I found. Most antiviruses today want to get into our browser. They told it is for our security. They need to deploy their add-ons to keep us safe. But, I was just curious. Is it only that? Our security? With countless possibilities an add-on can do, is it only about keeping us safe?What if those antivirus apps are doing something else? What if they don’t keep us safe? What if they do nothing, but making money for themselves? What if, those add-ons are the real back doors? What if……? What if…..?

Antivirus and Your Browser Extension

They come in different forms and names. But, they actually do nothing except rebranding the Ask Toolbar extensions. Your antivirus most likely does the same. It adds a toolbar into your browser, changes your default search engine, and gives you a new homepage. It told you that it was for your security. But, let me tell you this. Nothing changes with the new homepage. Website scan, cyber threat alarm, whatever they told you, any antivirus can do it without adding an extension or toolbar to your browser. So, why?

Simple, it is not about your security. It’s about making money from your clicks. Your new default search engine and homepage are the perfect way to generate more income. Many ad companies willing to pay more to reach more people. Thanks to these antivirus extensions, they can make money out from you.

Many people don’t realize it. A privacy hijack right before your eyes. If only we can tell you this is the only thing your antivirus does. Unfortunately, we can’t. Your antivirus might do more than privacy hijacking. Sometimes, it involves with unintended consequences.

Let me show you some examples.

AVG Web TuneUP is bundled inside every AVG antivirus. So, when you installed your AVG antivirus, you got this so-called ‘web protection.’ Per January 28th, 2016 there have been more than 9,831,000 Chrome users using this extension. That’s a significant amount of users to protect. These people trust AVG to “warn them of unsafe search results.”

So, what’s the deal? Let’s head back to December 2015 when Tavis Ormandy found something interesting. You may know him. He is one of Google’s security researcher. He found that AVG Web TuneUP inserts a large number of JavaScript APIs to user’s Chrome after installation. It shouldn’t be a problem if these APIs are working. But, the fact is, many of them are broken. These broken APIs are the least we can expect. Things they do have nothing to do with your security. In fact, they expose many security holes for cyber criminals. By using these holes, anyone can execute arbitrary code on your computer.  All thanks to AVG Web TuneUp.

After finding the issue, Tavis wrote this to AVG Antivirus:

“My concern is that your security software is disabling web security for 9 million Chrome users, apparently so that you can hijack search settings and the new tab page. I hope the severity of this issue is clear to you, fixing it should be your highest priority.”

Four days later, AVG released a patch. But, unfortunately, it’s not enough. Let’s take a look on Tavis’ response after the release:

“AVG submitted an extension with a ‘fix,’ but the fix was obviously incorrect.’

The patch was a failure. But, at least, we must appreciate AVG for their effort. Especially for asking Tavis’ help for this issue. Instructions were given on how to fix the issue. A day later, a working fix was released. And finally, it works. But, AVG still lots of work to do. The patch may be fixed by restricting the functions only to 2 AVG domains, But, there are many websites on those domains. Just like the patch, these websites need to be fixed as well. If not, even a single flow will let hackers to attack Chrome users.

All Windows lovers know this fact. Windows 10 Microsoft Edge is supposed to be a safer way to browse the web. Here are the reasons: 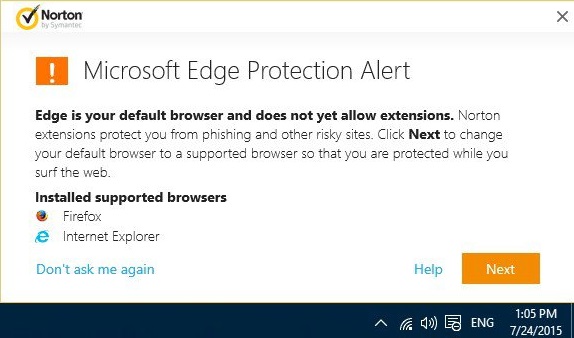 These reasons are enough to claim Microsoft Edge is well secured. But, that’s not gonna happen with Norton and McAfee. Here’s what they want. Stay away from Microsoft Edge. And what do they recommend? The old-day Internet Explorer. As if it wasn’t enough, they also ask your permission to remove Edge from your taskbar. All of this to persuade you using their browser extension.
So, does the extension work? Well, it does. But, far less than if you keep using Edge. The same goes for Norton. Thankfully, they need to stop in the near future. Edge is planning to support Chrome extensions. When it does, neither Norton nor McAfee can force you to use IE.

Avast Antivirus is not different. Once you installed the antivirus, your browser will get another extension. I was begin to think. What is all about this extension? This case, for example. Avast! won’t give you total protection if you don’t install their SafePrice update. But, instead of keeping you safe online, this update will only make money out of you. And guess who gets it. Avast! By giving you online shopping recommendations, this update not only will make money of you, but learning you as well. The more you click the ad, the more it will learn about you. It is just like stealing your privacy and money. But this time, they do it right before your eyes. They do it “with your permission.”

Here is how Avast! Antivirus play with you. First, it gives you a unique tracking ID. Now, every time you browse the web, the extension will send every single web page you browsed to Avast! servers. This is possible, all thanks to that unique ID.

Extension is just the beginning. It is the beginning of cyber threat. I hope you realize this. First rule, no antivirus can work without data. No online protection can protect you without data. The question is, where they get that data? The best way to surf the web is through encrypted connection. HTTPS, VPN, and all those stuffs. Nothing is supposed to ever look into this connection. But, if that’s the case, doesn’t it mean there’s no way you can be safe on the web?

Now, that’s the right question. Here is another fact. No antivirus can let that happen. Even though you went through an encrypted connection, they still want to ‘protect.’ So, here is what they do. They create a unique ‘man-in-the-middle’ attack.’ Yup, you read it. Your own antivirus attacks you. All because it wants to get data to protect you. It’s ironic, isn’t it? In order to keep you safe, your antivirus should attack you first. They did it with SuperFish. An antivirus’ certificate is used to replace user’s browser certificate. Thousands or even millions fell victim. We hoped it ended with the patches. However, security experts told us it won’t end soon.

How to Fix it? DISABLE THEM

That’s right. Those extensions are not even protecting you. So, why keeping them? Remove them and all your problem will be gone. You don’t need extension to tell which sites you should avoid. Search engines, like Google, have already had this feature. They built cyber threat detection filters in their system. So, whenever you google something, you can see which websites are safe to browse. That’s how we do it today. So, why keeping those extensions?

Don’t fall for the same trap. Whatever your antivirus say, never install its browser extension. If you already installed it, then just remove it from your browser. Here is how you can do it:

A Perfect Time to Forget Antivirus?

No, we don’t think so. Those antivirus apps may have lied to us. But, still, we need them. The question is, which one? 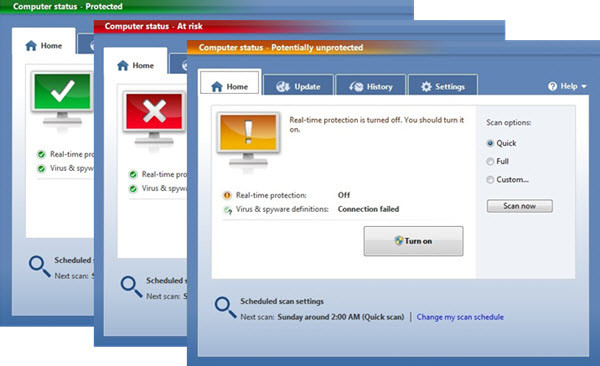 We, too, but not after reading this reasons. Windows Defender may be less popular compared to AVG, Avast!, or other antivirus apps. Some may not like how it works. However, this antivirus is not a complete mess. It comes with a reasonably competent security team. It has people you can rely on. You can trust your security to those people and they won’t let you down. Sure, there are flaws inside Windows Defender, but which doesn’t? Every antivirus has a flaw. The thing is, Windows Defender always learn to improve. Also, there is one thing you’ll love from this app. It won’t add any extension to your browser. Not today and in the future.

Of course, no one says that Windows Defender is the best. It is reliable enough. You can trust it. But, it doesn’t mean it is second to nothing. I believe you can find something else out there. Something good enough to protect you without exposing you to cyber criminals. Those antivirus apps can keep you safe online. But, please remember once again. Your online safety doesn’t depend on any extension. You can grab the antivirus, but leave the extension.