Get ready! The world will once again head to the greatest sports event this year! All the world’s best athletes will head to the Rio Summer Olympics 2016! This great event will kick off 2 days from now, on August 5th, 2016, in Rio de Janeiro.

Millions of eyes from around the world will be watching. For 17 days, more than 10,000 athletes from 206 countries will compete in 28 sports and 306 events. While this event will certainly be the most spectacular and awaited sports event this year, some people may not be able to watch the whole event due to policy issue.

But, don’t worry. There is a simple way you can watch the whole game.

When we first heard that this year’s Olympics won’t be available to all regions, we thought that it must be a joke. But, it isn’t. The 2016 Rio Summer Olympics will only available to certain regions. So, unless you somehow move to one of the supported regions, you won’t be able to watch the whole match and that’s how we’re gonna do it. We’ll show you how to move from your place to one of the supported regions, without actually moving you. All of this is possible because VPN Asia.

With our advanced IP mask technology, we temporarily change your IP address to one of our server’s. This way, the provider will only know that you’re watching the game from our server location, instead of your original location and that’s not all. Thanks to our security protocol, nothing and no one can harm, damage, or affect your system while you’re enjoying the game.

As mentioned before, the Rio Summer Olympics 2016 will be only available on several regions. Here they are with their official streaming partners:

In the United, NBC will broadcast the whole games for more than 4,500 hours using its Dolby Atmos and 4K features. The streaming is also available for iOS and Android users through NBC’s Live Extra App. For those who wants to enjoy VR experience of the game, NBC is offering 85 hours of Rio Olympics broadcast in 85 hours for certain sports, including the opening and closing ceremonies, beach volleyball, fencing, boxing, and gymnastic.

The only problem is, NBC broadcast is available only to US audience. That means the following message will appear if you’re trying to watch the game from outside the US:

The above notification appeared due to NBC’s geo-restriction policy for audience outside the US. But, lucky for us, by using VPN Asia, you will be able to bypass this geo-restriction and watch the whole Rio Olympics 2016 games.

The rest of the countries are similar to NBC and BBC. They provide live broadcast from Rio, but in order to watch the games, you need to be either in their service area or use a VPN.

How to Watch Rio Olympics without Cable

The Rio Summer Olympics 2016 will be broadcasted around the globe. However, there is a rumor that not all of the games will be available to every broadcasting partner. In other words, it seems that each of this official broadcasting partner will only broadcast parts of the games. For example, you may not be able to watch baseball match if you’re watching the games through BBC. In order to watch the game, you must switch the channel to an American broadcasting or alternative channel that streams baseball.

To fix this, you can use VPN Asia and stream the channels safely from your place. Here’s how you can do it:

How to Watch Rio Olympics on Android and iOS

There are some channels from which you can stream the Olympics. One of them is Sling TV. The company provides exclusive apps both for iOS and Android users.

Here is how you can use the app to watch Olympics 2016 from your Android:

And, what about iOS users?
You can use the same app to enjoy Olympics from your device. 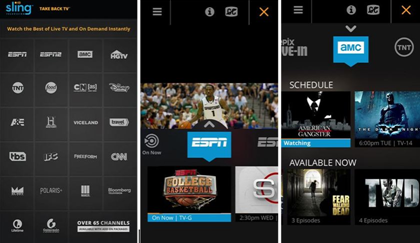 Here is how you can watch Olympics 2016 from your iOS device: