If you were lucky, you would only see the following template message. If you didn’t, well, you’d only see a blank, error page. 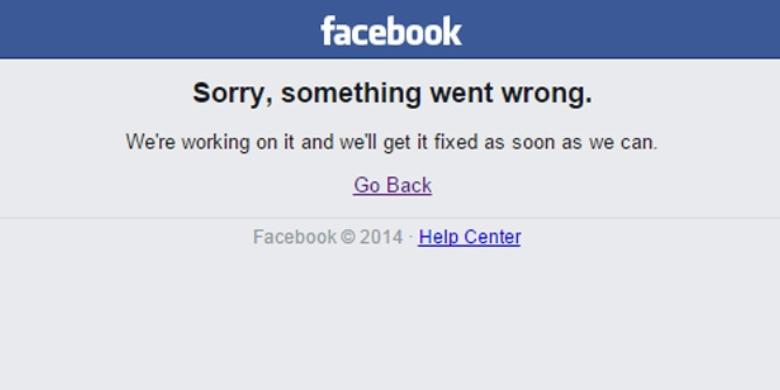 Why? Is there something wrong with my connection? Apparently not. Your connection is fine. If there’s a problem, that would be from Facebook’s side. Facebook.com site went down and it’s not the first issue we have in the last 7 days. Last Friday, Sept 25,  Facebook went down for nearly 10 minutes. Even though it was short, millions of people and businesses lost access to their account. Next, earlier this morning, Sep 29, it went down once again. This time, it went 30 minutes longer than the first incident.

Do you know how huge the impact is for a 40-minute down? Besides million of people who lost access to their account, there were other million of companies who lost access to their businesses and their customers, as well. Billions of dollar were lost within only 40 minutes. During this time, the only thing they got from the site was a template message, saying “Sorry, something went wrong. We’re working on it and we’ll get it fixed as soon as we can.” Does it mean anything? To help reduce the panic, it works. At least, people know they shouldn’t be blamed for the error. You can rest assured that Facebook engineers were working so hard to give you access to your account. That’s a good news everyone wants to hear, but not the company’s shareholder. As this down turns out to be the third in this month, some shareholders began losing their trust to the company performance. As released by BBC, Facebook lost 4% in their share value or $3.71875 per share. Now, it’s only $83.25 per share.

After a series of investigation, the problem lies on Facebook Graph API. It is the core of Facebook system, which processes your status, photos, images, videos, and everything you upload to Facebook and make them available to your friends, subscribed pages, and groups. With this API, you don’t need to upload the same file multiple times if you want to show it at different pages or groups. The bad news is, whenever an error occurs on the Graph API, it would affect the whole system. Sometimes, it also affect other companies which are connected to Facebook data.

Serving more than 1.5 million users, Facebook is the largest social media on earth. However, if the company didn’t come with a real solution to end this issue, people might leave Facebook.

“I apologize for #facebookdown. Someone dared me to push the button and I did,” said @DaveLieber.

“Yes, we can confirm Facebook is down, please don’t call us! What a great opportunity to spend some time with your family… #FacebookDown,” said @MPSKingston

Those tweets didn’t end there. There are lots of other sarcastic tweets aimed to the largest social media company in this world, due to the this issue. Well, people get upset when they can’t access their account, especially if that happened for twice within a week. It won’t be a problem if the server went down once in a few months, but double streaks within 7 days is not an excuse, even for a company like Facebook. Probably, the only reason people didn’t get mad on Facebook was because the company resolved the problem quickly. However, this is not enough. As this issue turns out to be the third in this month, Facebook should probably thinking on evaluating its server. We don’t expect to have the fourth in this month.